Education:
Graduated from Huntington Preparatory School for Boys in Boston Massachusetts in 1959. Received a Bachelor of Science degree in Accounting from Bentley College of Accounting and Finance in Boston Massachusetts in 1966. Received an Masters of Science degree in Business Education at University of North Carolina at Greensboro North Carolina in 1977.

Military:
United States Navy Reserves from 1961 to 1971 (active duty 1966 to 1968), as a Disbursing Clerk (accountant). Received a Captain's Commendation for exemplary work in support of two Attack Carrier Striking Groups and Amphibious Forces for the Sixth Fleet, working overtime to prepare payroll for a number of deployed ships during a payroll transition policy.

Professional:
Began in the corporate world as an auditor for one of the “Big Eight” CPA firms, Peat, Marwick, Mitchell (now KPMG). Finished as a Controller for a Fortune 500 conglomerate, Washington Group Inc., responsible for two divisions. Left the corporate world and embarked on the teaching profession in order to be a better family man. Chose lower income for an on board family relationship. Taught advanced accounting and management at Bennett College, Greensboro North Carolina from 1980 to retirement in 1994. It was a low income profession, but highly rewarding in allowing time with family while making a contribution to society by developing the career and professional personalities of a good number of students.

Pit Bulls:
Development of the Dogs of Velvet and Steel Productions business began in the late 1970's, by traveling across the nation, interviewing Pit Bull people of all forms – famous and future famous dog fighters, famous dogs, confirmation show winners, consistent winners in weight pulling contests, national level competitors in Schutzhund, the top breeders in the world, researching periodicals and books, and reporting very thorough and deep research in all of the Pit Bull periodicals.  With pit bull journalism in such demand, the market repeatedly asked for a new book on the breed. This galvanized a concerted effort to spend five years writing the subsequently internationally acclaimed book Dogs of Velvet and Steel – now a world-wide best seller on the breed. The name describes the view of this singularly distinctive breed.  The book was typed late at night on an old fashioned home typewriter. It was discovered that book publishers make all the money and so a chance was taken to embark on to this day untested marketing ground.  The layout was done personally and the book provided completely camera ready to Walsworth Publishing company, and had them print it while published self sufficiently.  Direct viewer interest and ultimate sales were received through advertising in Pit Bull periodicals along with correspondence from orders received. These days they call it targeted media. It was never intended to promote dog fighting – if it promoted anything it was to move this breed into modern activities. The book authored contains chapters for the Pet Owner, the Confirmation Show Dog, the Weight Pulling Competitor, the Catch (to hunt and catch – by the ear – wild hog or farm hogs) Dog, the Schutzhund Dog, an historical chapter on the dog fighting history, replete with famous dogs and dog fighters, a chapter on the care and upkeep – etc. This book was designed to steer the breed away from the outlaw stigma of dog fighting and into mainstream America by becoming involved in these healthy alternatives.  The book has done more to fight participation in dog fighting than all of the laws and law enforcement – by quite simply touting fun alternatives. 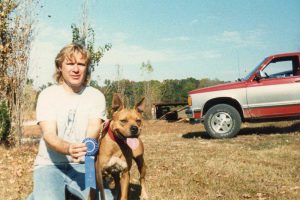 Founded a Christian ministry entitled Crusaders for Christ. The stated mission centered on using my advanced experience (a martial arts school) as a draw and a tool to help build the Kingdom of God by expressing salvation and then teach those who are born into salvation how to walk and live according to the teachings of the bible.  Herein lies the solution to many of the ills of our nation. Taught a bible class at local church near Pittsville Virginia.

The Crusaders for Christ patch carries the colors of the American flag. The blue signifies God’s created heaven. The red of course stands for Christ’s shed blood. The white represents God’s purity. The sword is The Word of God – Ephesians 6:17. The calligraphy is ancient Hebrew and means God’s Word. The stars of course god’s created stars – three for the Trinitarian aspect of our Creator God. 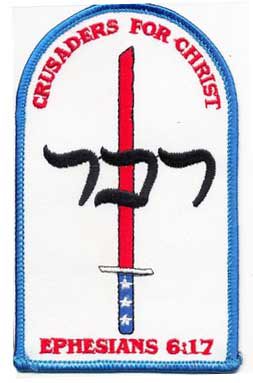